Past gardeners are collecting Garden Tips unique to the Cedar Falls Community Gardens.  We’ll add information about some of the special challenges in the Cedar Falls garden space from weed control to bug issues to co-existing with our four legged friends.  Always scroll to the bottom for the newest tips,  Send us your ideas as well to gardener@cfcommunitygardens.org

We must note at the beginning that none of the members of the committee are Master Gardeners. However, we all have a varied number of years gardening here and other places, have talked with longtime gardeners, and, of course, have been on the internet with frequency looking for answers to gardening problems.

Over the past few years untended gardens were allowed to go to weeds. This, of course, means that the weeds were allowed to reseed and proliferate. As a result, weeds are a problem in our gardens. There are a few things we would like to suggest that will help keep them under control. Shortly after planting, weed the garden thoroughly. Put down single sheets of newspaper covered with around 2 inches of mulch, straw, or grass cuttings and water thoroughly. In the past we have had allowed weed cloth, but that should be used minimally- It is very difficult to remove and weeds grow through it anyway. Newspaper biodegrades easily and, for that matter, is much less expensive. Grass is better than mulch/straw because it also degrades rapidly and can be easily tilled in the following year. However, it has to be hauled in and only should be used after the third mowing if a lawn has been treated.
(If you would like to use weed cloth, please send me an email. I have used it a great deal and can share my experiences with you- peg)

There will be weeds growing into the gardens from the pathways. The most difficult weeds to control are those that grow under and into fences that can’t be reached by the mower.  The best way to handle this seems to be to put the fence about two inches into the tilled area on all sides and then, with a hoe, make a trench two inches wide and deep—rather like what is done in England. Because the trench is carved out of tilled soil, this is easily done. What the trench does is allow mowing up to the fence, cutting down the weeds before they can migrate into the garden. In any event, while these actions will not eliminate the weeds, they will make later weeding a lot easier and keep the gardens cleaner.

Tomatoes have had a problem because of what looks like (has not been officially diagnosed) a fungal wilt. Whatever it is, everyone’s tomato plants started with yellowing leaves at the bottom which moved up the plants. The plants survived the whole season, but the production was less than with a completely healthy plant. Some of us were able to hold off the disease by planting tomatoes labeled VF or VFN(fusarium/verticillium/nematode) resistant. That, along with mulching to prevent rain splashing soil on the leaves and periodically spraying the plants with neem oil, seemed to allow for at least a decent production of tomatoes. The only other thing that some gardeners say one can do is dig a much larger hole for the tomatoes and add bagged garden soil. No one has tried that, so who knows.
Burying your tomatoes also helps and creates a strong root system. You can read more about that here https://www.thespruce.com/plant-tomatoes-deep-for-strong-growth-2540064

There was an infestation of squash bugs last year to the point where everyone lost, most particularly, all their squash and melon plants. While there are manual ways to go after them, such as hand picking and destroying eggs before they hatch, this is the most tedious job one can imagine. As such, for this year we have decided to allow the application of Sevin. If you are growing squash and/or melons, get some and apply as recommended.
Vine borers are also an issue. Do not plant squash in an area where you planted squash last year. Using yellow bowls filled dawn and water will also help early as they are attracted to yellow. Vine borers will kill your plant if you don’t catch them early, but you can perform surgery on them and save them. Keep an eye out and read up on this if you plan to plant squash.

Potatoes:
We do not recommend planting potatoes. Colorado potato beetles are rampant at the gardens and need to be picked off daily or your potato plants will die within a week or so of seeing them.They also attack tomatoes. It takes four years to get rid of them and the 2019 season there were thousands. Please, buy your potatoes at the market.

Finally, for other fungal and insect issues (such as cabbage moths), neem oil is the “go to” spray for organic gardeners. Probably not as effective as chemicals, but it works and it is by far better for the environment and for us as a part of that environment.

More Tips from Our Gardeners: 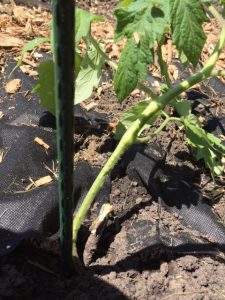 We may have cutworms in the garden.  As you know, these can be lethal to your plants.  D.W. suggests putting a stick on either side of the plant stem pushed at least 2 inches into the ground and extending 2 inches above ground.  The cutworm can’t curl round the plant stem and cut it,

C.W. had concerns about a nitrogen deficit in the soil and recommends adding blood meal if you see early yellowing of your plants and seedlings. If you are adding a plant fertilizer, check to see how much nitrogen it contains.
You can also add a teaspoon of worm castings to each plant and that will help, too.

We have a lot of calcium in the soil, so you do not need to add CAL.

Squash bugs have appeared.   While Sevin dust is being allowed this year, some folks don’t like to use it.    C.W. suggests using diatomaceous earth which is also a dust but considered totally organic.   You can sprinkle it around and on vulnerable plants to kill or deter insects.

Japanese Beetle have also joined us.  C.W. sprayed her flowers with a ‘stinky’ fish emulsion and water mixture and says the beetles land but don’t feed.  This is the first time I have seen Japanese beetles out at the garden but there are other beetles  around as well and this should help there also,

The CF Community Garden was created for the benefit of the residents of Cedar Falls.  All plants and vegetables are the property of the resident gardeners.

If you are interested in renting a garden plot to grow your own vegetables, plants or flowers, please reserve a plot.  Registration will be open soon.

For those in need, some gardeners here and around the area donate their excess produce to NE Iowa Food Bank.