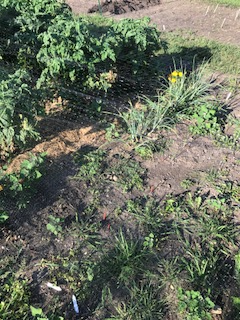 The Case of the Missing Onions

Apparently sometime late yesterday afternoon or early evening, a bandit interested in onions struck the Cedar Falls Community Gardens.  The first report came from a garden what is covered on all sides and over the top with bird netting.  Half of the gardeners’ row of onions were totally missing, no debris, just holes in the ground  and the netting was intact!!   Next door, the onions were also picked over though there are outer onion skins laying at the edge of the garden.

While investigating this morning, the committee spoke with another nearby neighbor of the original victim and they were also missing onions and perhaps a nearly ripe tomato or two,  A garden walk though found a few other plots where you could see recent onion pulls in rows.  We’re not sure if a garden owner was harvesting or if our bandit is gleaning across the whole area!!

The evidence so far seems to indicate we may have a two legged bandit as the deer and raccoons are not so selective or so neat,

The Wonderful Boys in Blue

The City of Cedar Falls Police will be driving by and keeping an eye out for unusual activity.  Thank them if you see them!!!